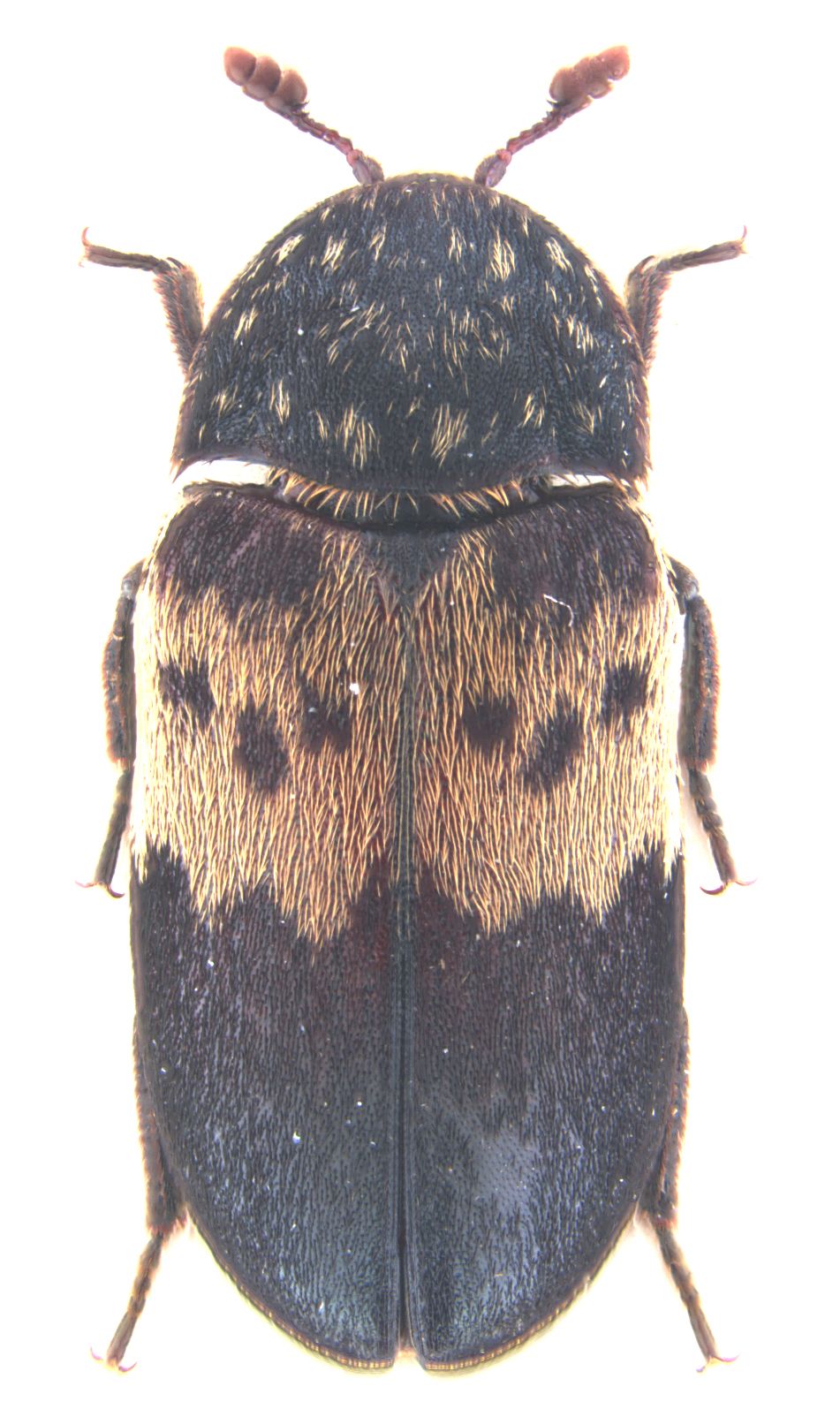 Most Dermestidae species of economic interest are found worldwide. Men have carried them around unintentionally for several thousand years, maybe even tens of thousands of years.

About 30 Dermestidae species (84 are recorded in France) are likely to infest our museums, heritage premises, warehouses, houses,… provided that they can find the right food in them.
The Dermestes genus alone comprises more than a quarter of the species of the Dermestidae family in France, and though common in natural environments, it has the highest number of commensal species within the family.

Dermestes (literally “skin-eaters”) are mostly carnivorous and necrophagous, and their voracious, often cannibal larvae feed on bodies and remains of animals (bones, feathers, hairs, skin, flesh,…), on dessicated insects, on pupae or nymphs (see “Infested Materials” chapter). Though brisk and quick walkers, these insects are poor fliers, but they can spot food from very long distances (several hundred meters).

The Dermestes genus is easily recognizable thanks to its sturdy, elongate oval aspect and to the absence of a median ocellus on its forehead. Six more Dermestes species are described in fact-sheets in this website: D. Olivieri (= D. ater), D. carnivorus, D. frischi, D. maculatus, D. peruvianus and D. undulatus. Readers can refer to them for more information about those pests.

Larder beetles are dreaded hosts of museums and libraries containing old books. They preferentially seek skins and leathers, but can also be particularly harmful to animal collections (insects, stuffed animals). Although they have a necrophagous feeding diet, they can also develop on certain vegetal substrates.

The species was once quite frequent in rural environments, but the considerable evolution of foodstuff preservation caused its numbers to drop. In our houses, warehouses, heritage places,… this dermestes can live to the expense of various products and materials (see “Infested Materials” chapter).

Like several other Dermestidae, the larder beetle is a very useful forensic entomology indicator for the scientific police, for its presence on a body can provide valuable chronological information for determining when death occurred.

Together with D. Olivieri (= D. ater) and D. peruvianus, Dermestes lardarius  belongs to the sub-genus Dermestes, whose species are characterised by a fine, scarce hairiness on the ventral face of their abdomen which allows for the dark cuticle to be seen.

Body about 2.5-fold more in length than in width, The pronotum is rather massive and is about 1/3 of the elytra in length.
Short antennae, with 11 segments; the last 3 are wider and form a compact club.

Prothorax ornate with small, irregular, light-coloured spots more or less laid in circles.
Males differ from females by the presence of a tuft of red hairs located in the middle of their 3rd and 4th abdominal sternites.

The front half of the elytra bears a thick, golden-grey, flat hairiness with 3 roughly rounded black spots in their middle that can be more or less merged together.
Rear half of the elytra thoroughly blackish.
Abdominal sternites utterly blackish-brown, with a few red-yellowish hairs on the rear border of each segment.

On the 9th abdominal segment (the last one), presence of 2 sharp spikes called urogomphs.
They are distinctly curved toward the rear end.

Uniformly red-brown to dark brown on the top, without any light-coloured spots on the median line. Brownish hairiness.
Nota: The morphology or colour features mentioned here can only be used with old larvae, generally 12 mm long or more.

In natural environments, adult D. lardarius overwinter. They are commonly found, especially in summer when they more particularly infests the nests of birds (pigeons,…), processionary caterpillars, wasps, and bee-hives.
In the south of France (Corsica,…), their agile larvae can be seen moving around on tree barks, especially on cork oaks, where they feed on any kind of animal debris (remains of chrysalids, dead butterflies…). Larder beetle larvae are much less sedentary than the larvae of similar species and move around actively.
The development cycle of larder beetles varies a lot depending on the environment they live in, food, and temperature and relative humidity conditions. In natural environments, their cycle is longer than inside buildings where it requires 6 to 8 weeks in optimal conditions, i.e. 20 to 22°C and 65% relative humidity.
Fecundity also depends on ambient conditions; it is between 150 and 200 eggs, and does not carry through below 15°C and above 30°C; but it is optimal when the substrate is very rich in nutrients and above all in water.
Protein-rich meals influence egg-laying. Eggs are white, about 1.8 mm long and banana-shaped. Females lay them in groups of 2 to 8 in the cracks of the infested substrate or nearby. Egg-laying can last over a several-month period (up to 5 or 6). Incubation lasts about 12 days.
Larvae feed as soon as they have hatched, and after several molts (6 to 9 depending on ambient conditions), they bore out a small cavity in the substrate for safety (let us recall that Dermestes are cannibal), where nymphosis takes place. Adults are formed after 9 to 12 days, and then they leave their cell to take flight. In optimal conditions, D.lardarius imagoes can live up to 1 year.
During severe larval infestations, larval or exuvial hairs (they fall out or break easily) can cause irritation or allergic reactions in sensitive people.

Dermestes lardarius can cause important damage in meat and dried fish warehouses (hams, sausages and by-products).
Skins, animal wool and its by-products, feathers, any body or remains of an insect or of a dead animal, silkworm cocoons, beeswax, cheese and dried fruit are also part of their food diet.

The species can severely damage insect and animal collections in museums. Dermestes lardarius are frequent in henhouses where they can even infest very young chicks.

Let us recall that the species was once very frequent in rural environments, but the considerable evolution of foodstuff preservation caused its numbers to drop.

In addition to the damage due to their feeding habits, larder beetle larvae can drill into their food substrate while seeking for nymphosis sites, but they also frequently thread and bore into all kinds of materials, including wood, pipes (even made of lead), insulating materials,… and this considerably amplifies their harmfulness.

Let us add that adults can cause similar damage when they come out after nymphosis.
Dermestes lardarius, like other Dermestes, can develop in high numbers at the expense of a mere mouse or rat body, a wasp’s nest,…. That is why it is necessary to keep all high-risk places clean.

The species probably originated from Eurasia. It is commonly found in Western Europe and can be found as far as Siberia.
It spread worldwide as a result of commercial trade

Among the other Dermestes species found in France (there are 22 of them) and more particularly those of economic interest, D.lardarius adults can easily be identified thanks to the following features taken together:

Old D.lardarius larvae can be told from the larvae of similar species thanks to the following features taken together: